Our arrival in Salzburg was one of sheer determination with a generous condimental topping of exhaustion. With eyes swinging crazily from the steering wheel in search of a comfortable place to collapse on the dashboard we pulled into the hotel and made a beeline for the front desk. Fear not, we parked the truck, trailer and its inimitable passenger, our sponsorifically stickered peugeot iON, before entering the building. The front desk announced that our reservation wasn’t reserved but the truck and trailers’ was and therefore had a place to stay for the duration of the WAVE. They kindly gave us an address of nearby hotel  and off we went on the quest of quests in quest of the nearly unquestable considering the condition we were in after a 25 hour drive.

click on the image to see full size
After finding the new front desk and before you could say Jack Robinson or Bobs yer uncle, which he is clearly not, we were installed in our respective rooms incapable of initiating a singular thought. Our stomachs took a dictatorial lead bringing us together over a boiling kettle and instant noodles swelling in sumptuous delight. Msg’d into insanity sleep beckoned and we were out for the count.
The following morning refreshed, revived and rebooted we discovered the breakfast room with an assortment of yoghurts, fresh sliced fruits, muesli, nano shredded wheat, eggs, toast, deli meats n cheese, pastries and coffee or tea. Plate and bowl were filled and a veritable wheel barrow of coffee was served by our wonderful hostess of the Frauenshuh Hotel aproned in true Austrian tradition. Definitely recommended!!!!! 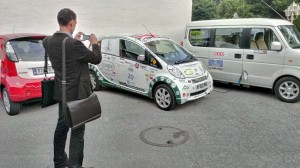 My room with a view offers green fields beginning to give the term saturation a whole new definition. It has been raining, at times a mere drizzle, at other times a downpour and the mountains in the near distance could prove to be the Alpine Ararat of these modern times of climate change.  Hunger began coursing its way through all the DNA strands of our existential bodies and the need for sustenance grew urging us out the door and down the road to what initially seemed to be an Indian restaurant. It wasn’t, it was Tibetan and to top it off, although a bit itchy at first sight presented us with food cooked in slow food fashion and it was absolutely phenomenal! Stuffed to the gills we headed back to the Frauenshuh observing the wild flowers and strawberries growing everywhere. Various types of moss grew on the rough sculpted barks of the trees we passed. Nothing to fear from the canid tree known as dogwood for he was not present nor rabid. So, when we returned to the front door of the hotel we were greeted by Mauritz a two year old Tom wet from the rain and not too happy about that fact. We ushered him in thinking he might lie down on his spot on the couch near the reception. Instead he followed us upstairs to provide feline entertainment. We were his heroes and he honored us with his capers, jumping, darting, chasing grabbing, nipping and nuzzling. Mauritz was one seriously happy camper and soon he proved his feline self by constantly being on the wrong side of the door. Being a cat person myself I understood his dilemma and played door person until I fell asleep nearly wrapped around the doorknob. Waking the following morning proved I had managed to extricate myself from this rather dangerous position leaving me with a taste of the big top. 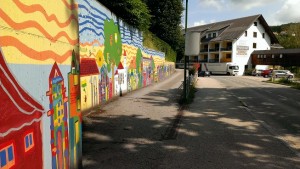 Eichgraben greeted us in silence as we arrived at the hotel where the  WAVE would officially begin the following day. We plugged in and looked for an open door. The front desk seemed to be missing or was possibly away for the duration, we had no idea and so after shifting things in the car we settled in for the night in the front seats wrapped in fleece and or sleeping bag with my feet neatly tucked into the glove compartment and Gordon tucked in behind and under the steering wheel. We had arrived and the morning would bring more news and a front desk with an awesome man with wonderful sense of humor. Tomorrow the WAVE, from that point on the world and the delivery of the Double Edged Sword Against Climate Change! 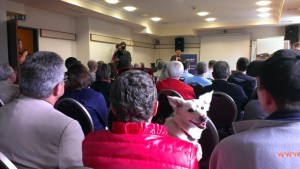 The WAVE was officially opened today with an introduction of all the teams taking part this year. Louis Palmer introduced each team who then stood before the packed room to give a succinct talk about the who and why they are taking part in this years WAVE. Before sitting down the team number stickers along with a goodie bag was handed over. There are a total of 40 teams, 4 assistance cars/vans armed with cables and chargers.