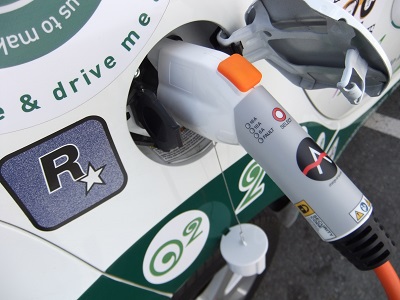 After a night of searching for wifi in the room while attempting to write this and yesterday’s blog my eyes packed it in and closed shop leaving me in a state of bewilderment. They refused to open and after about three and half hours sleep they suddenly popped open at the sound of my alarm clock chirruping their cricketly sound. We had to leave at 07:40 for the next stop on our journey for the day was to be filled with a number of destinations. The first on the agenda was a trip of 126 kilometers to

Güssing which kept us guessing as to the how far, how many bars of energy to how many kilometers and the eventual charge at a gas station where with only 8 minutes left we were told we couldn’t charge. After explaining what we were doing and why the young lady decided all was good and we could finish. Shortly after that we were on our way and arrived in Güssing where all cars were charged and lunch was served.
Our next stop would be another first for me but not for Gordon who is seriously experienced in the automotive world of four firm wheels on a Tarmac whizzing by beneath eager tires. We hit the starting line, waited that chilling moment before take off and off we went  biting into the asphalt we danced thought the slalom and cut a slice of cake through the first big turn. We bore down like a hot knife through butter then took a couple of curves out of left field and headed straight for the finish line. The whole time I was navigating and it all took only 56.5 seconds, quicker then one of the Teslas and the Twike. This was especially cool since I always considered myself a nagivator and as it turns out I am a navigator. Even more impressive I can actually look down, write, read and do the numbers without feeling like I am going toss my cookies. It would in the long term be a pity to lose all those cookies. We hung about and watched as the other teams took their turns and then it was time to move onto the next thing on the agenda, namely wash the car, write the blog, and get to the Deutschlandsberg, our hotel/hostel for the night. The cars would be parked down the hill within an enclosed area amongst trees with a stream pulsating over the rocks. Team Strombolli was having a problem and out of curiosity I went to have a look and bent over the hood. It seemed there was a problem with a fuse that had blown, a very little tiny fuse and their car would not load or move or anything. The tool department was suffering a dire lack of toolage and the many rough hands in the arena were rather cacophonous in their engagement. I began to get a picture of the problem and then thought, hey, Gordon might have a solution. So I gave him a shout and he came, bent over, peered around, asked questions and said, “Yeah, I can do that” and walked to our car and began digging around. I walked after him,was handed a SEC LED any-where light and a bag of boiled English sweets to offer to the Strombolli team and the Brusa man. Gordon followed with a handful of toolish goodies including the nord lock bottle openers with their respective wing nuts. Yes, wings have nuts which means that nuts fly and this could get worse before it gets better. The anatomical lesson over, between Gordon and a couple of good pointers from yours truly the problem was quickly solved and all cheered. This didn’t help the blog placement much but Team Strombolli could now continue with the WAVE and that was awesomeness quantified!!!! Gordon and I headed for the hotel/hostel which wasn’t hostile at all and got online to blog the blog as blogs want. The wifi dropped us like a rock, we logged on again, the wifi took a leave of absence, we logged on again, the wifi arrogantly took off for a quieter field of work leaving us high and dry and bewildered. Now we were stuck and decided at 02:30 a.m. to throw in the proverbial towel which the wifi probably wanted in the first place so it could take a shower after a long day at the office in cyberspace.
Share this: