After the epitome of a short night compromised by the blogification of the former two days we awoke blathering about snoring, disappearing socks, a diversity of plugged in technology enjoying a long drink and all four of us giggling and laughing. I say the four of us for we were sharing the room with Andreas and Angela of team Twike our equals in Cleesian nuttery quantified and totally lovable!!! One by one the shower was the choice of occupation and then the mad rush for breakfast, guzzling coffee, searching for the well hidden muesli in plain sight and settling in for the eggs and what have you on a plate of snowy white matching the glacier of the previous day.
The road had to be hit by 07:00 Jack and we were ready to hammer that sucker. Gps’ing the mountain road and we were stopped dead in our tracks by a road block weighted down making clear the gravity of the situation, the road chewed and effectively made rabid we made for the proverbial hills and the aid of a local. Zell Am Ziller  was now in our sights. The goal reached we charged the batteries including our own with lattes under dark green umbrellas baking in the sun. Thankfully there was a reticent breeze but we had to keep moving and get to Innsbruck in the middle of town in a stone square and nary a tree big enough to provide shade. Frankly this shocks me every single solitary time!!! Those stone covered city squares reach a colossal 65*C and there is no one who can tell me they find this delightful. Trees would cool those city squares and, in fact, the cities themselves. The human over heated grump n drop factor would decline dramatically in city dwellers!!!! And then one must take into consideration that on a world wide scale this planet would no longer be suffering an ultimately deadly fever if we would simply replenish our rain forests around the world. In fact, the Growing Air Foundation is busy with this and the more people, corporations, banks etc join in we can cool our planet down. 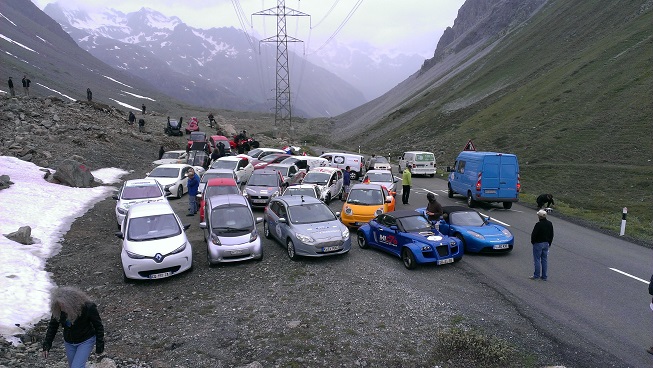 Landek was our next stop of the day and another small square covered in cement/stone with umbrellas providing the shade…….how wearisome this is….I don’t wish to harp but trees would provide not only shade they would also provide a pleasant cooling affect. Our cement, stone, tarred, glass, bricked cities have become death traps and that includes the fossil fuel guzzlers dumping their heat, fine particulates, and let’s face it poison into the air. Trees, the replanting of our rain forests and sustainable vehicles are the present and future for a healthy planet!
The battery was finally charged and we could leave Landek for Tsent and we would be taking Louis with us. The back seat was reorganized in record time and looked very respectable although some things threatened to attack anyone attempting to sit next to the tidy pile of suitcases, bags, and other paraphernalia. Louis stepped inside, closed the door, I moved my seat forward to accommodate  his long legs and Gordon began to drive to Tsent. Louis hardly had a moment to breathe 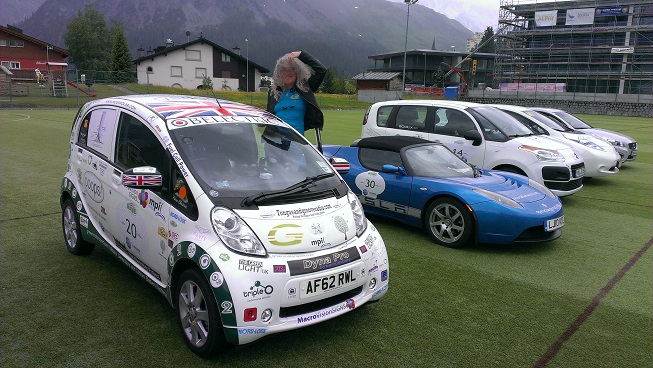 As we came into the town the band began to play and we all disembarked. Louis headed for the Mayor, Gordon headed for the plug box and I headed for what ever might be headed for completely headless from lack of sleep causing me to be heady. However one must look towards the future and head for the next hill which in this case was the next mountain, namely La Punt. We were given a fabulously informative verbal tour of the beautiful areas we passed as well as information of the protected forest visible from the road in all its majesty. Again upon arrival and on our last juice bar of electricity Louis disembarked, Gordon began the pluggers progress and I wondered how bunkers could be above ground and came to the conclusion that the only way to enter them in order to bunk for the night was…..the bunkers must be hydraulically lifted, a monumental feat of Swiss engineering and then lowered again. We entered the building turned the corner and there in a large room was a long table decked out with the most wonderful buffet in the world pretty much most of it vegetarian! A dream come true and I stood there gobsmacked and slack jawed at this delight for the eyes and stomach. It was absolutely scrumptious and I will add many many thanks to our hostess for this phenomenal meal.