After a rather unsettling night of desertification of the core and a lack of sefonsifying sustenance we headed for a number of small places with an abundance of school children ranging in age from 7-15. All were intensely excited about seeing the electric vehicles we were all driving and the nano presentations each team gave informing the kids about their own particular mode of transportation. One town blended into the next with such speed it spun ones mind into a circus of navigational sagacity, the likes of which have never been seen before. 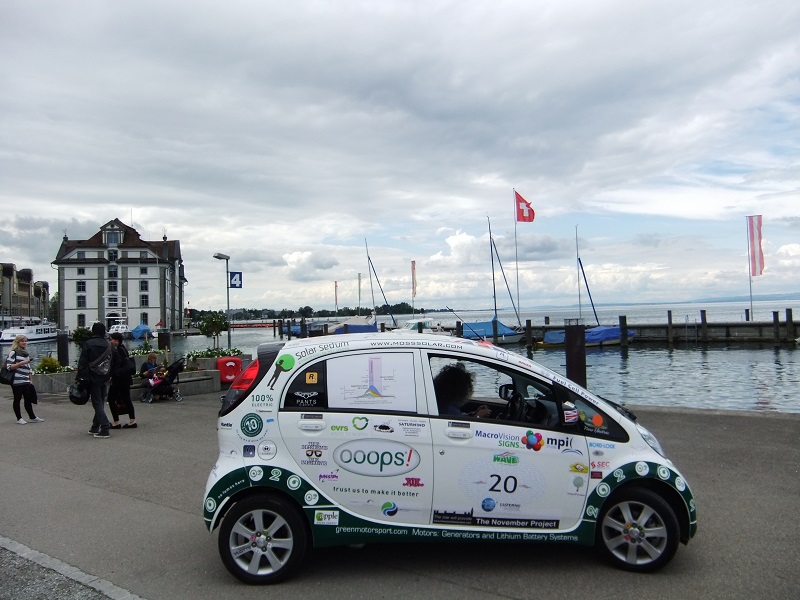 Making a bead for the next town within this run of towns an Audi pulled out of its house with its owner at the wheel right in front of us. The Audi was colored gold and this proved to be the first clue that its driver was a colossal psychopathic barf brain. He drove slowly and we needed to pass him. At the moment we were next to him he hit the accelerator. We saw an oncoming car and darted back behind him. At that very instant the jerk hit the brakes which led to Gordon hitting the brakes which, by the way, work better than any brakes I have ever encountered. We tried to pass again and apparently this moth eaten ding-a-ling liked summer repeats and did the same thing. This happened a total of four times, the last one being when he suddenly decided to hit his brakes 15 meters before the green light. An elderly man on the sidewalk looked at the gold Audi with utter confusion. Thankfully he turned off to some side street and we could continue. We eventually came to a town called Rorschach which is most likely where that particular test was developed. It seemed this was the best place for our gold Audi fortzengorgle to be tested for vehicular homicidal tendencies. It was time to head for the hills and the hills turned out to be a youth hostel…more tomorrow, the day has been long, the terrain beautiful and the kids were a lot of fun.