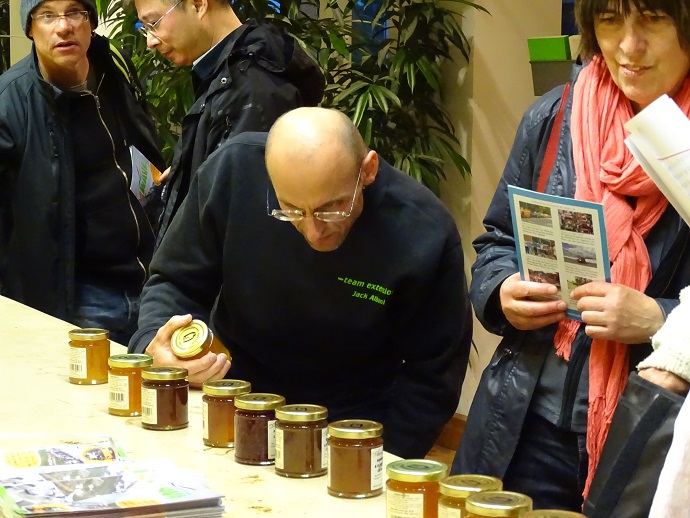 Eventually Friday came and after getting things organized Peter and Helga announced breakfast was being served on the top floor, which happens to be his parents apartment. The table was decked out and truly looked wonderful. Various jams, boiled eggs, four different types of bread including big pretzels, just like in Central Park in New York. Of course Germany is the source of those famous pretzels! Delish! There were also a couple different kinds of cheeses and pork that Gordon got into quite happily.

Peters mother planted and cares for her beautiful garden downstairs as well as all her gorgeous orchids and other plants on their balcony and windowsill upstairs. She not only has a green thumb, every digit on both hands is green and so she’s a natural. Both parents are absolutely delightful!
Auntie Val’s boxes of jams were loaded into Peter and Helga’s Zoe as well as a few other things that could not possibly fit on or in the buggy which we will call the Tapir from here on in. Our own baggage was stowed on top of the Tapir and battened down with a tarp that snaps shut keeping all contents dry. Gordon and I donned our helmets and climbed into the Tapir. The goggles were also put on and we were ready to hit the road along with Peter and Helga. My head bobbed around like the head on a kewpie doll due to the weight of the helmet. Since my neck was protesting the decision was made not to wear mine but Gordon kept his on and donned the goggles like a swashbuckling cartoon hero! Thankfully he didn’t try leaping off tall buildings or go faster than a speeding bullet and besides he didn’t have a cape to enable the afore mentioned activities. He is, however, the Plug Hunter and now also the Tapir Man!
And off we drove, the Tapir Man and sidekick, like a speeding Tapir into the wilds of Germany heading towards Bietigheim-Bissingen for the gathering of the Wave participants would take place. There the various teams would be introduced and Louis would give his briefing about the following day! There were, in fact, 78 teams, four support teams and Louis, our fearless leader, with his incredible crew and the switch bus. To all the teams were introduced on stage for if that would have happened it would have taken all night and possibly a good portion of the following day. Louis gave the briefing and then it was time to enjoy some food provided by our hosts. This particular writer and vegetarian was in heaven, with eyes popping at all the delicious goodies prepared by our hosts. The very best part was seeing all the people who had taken part in last years WAVE taking part in this years WAVE. It was like a huge family reunion!!! All was good with the world and my stomach celebrated. Pretty soon the teams headed off for their lodgings for the night. We headed for Jugendgastehaus Leonbergwhich we eventually found somewhere out in the toolies that seemed far from the madding crowd, quite isolated and very quiet.
Share this: