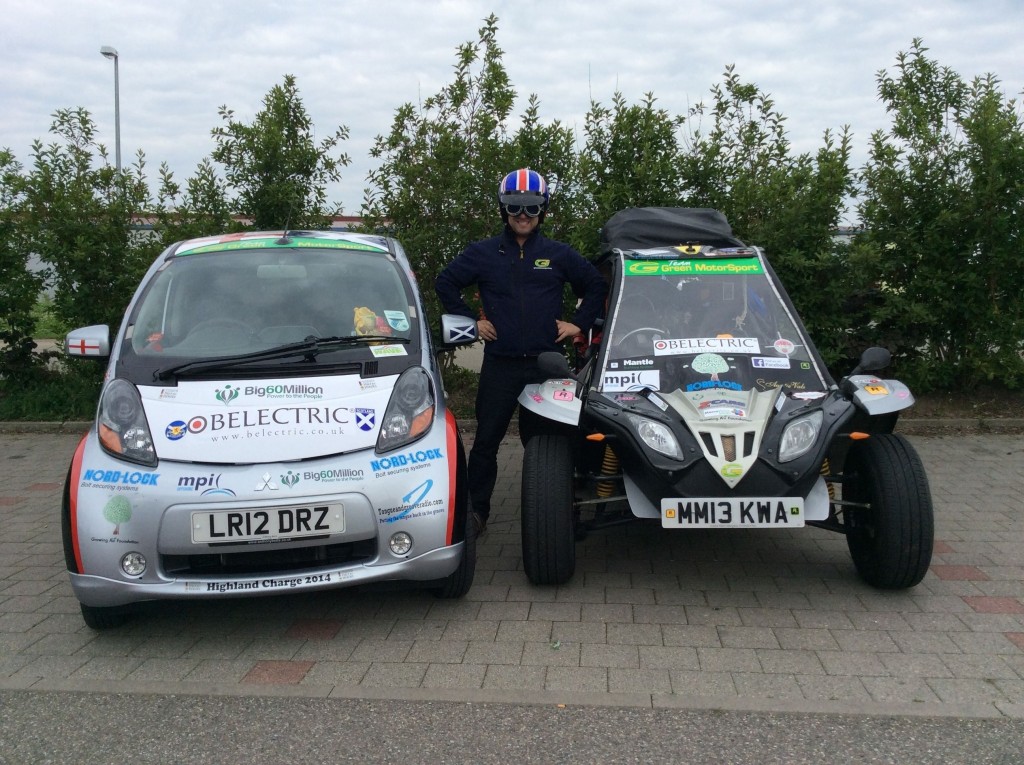 We, Gordon Foat of Green MotorSport and I, Leora Rosner of the Growing Air Foundation and Brian and Jean Orr of EV Matters are Team Green MotorSport with WAVE rally number 3 and 37. Pretty cool, the number 3 for it is one of the Fibonacci numbers, which appear throughout nature. Since we are forging the double edged sword against climate change to help our planet, the natural world, then that number is magic, that number defines us! 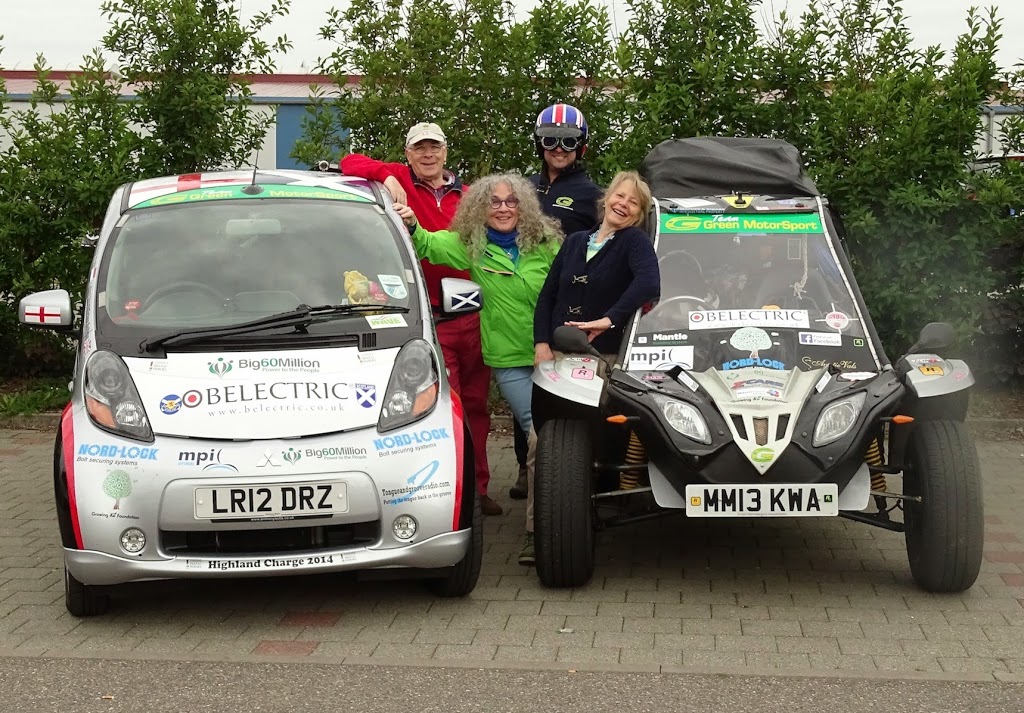 I woke up this morning after a three-hour sleep max, while Gordon hadn’t gotten any shuteye what so ever. He was working on the last details of the buggy that at times was driving him buggy, discovered that the two bolts holding the main sprocket were so loose they could be easily unscrewed but he prevailed and won that race. The buggy, whom we will refer to as the Tapir from here on in was loaded, had her seat belts fastened, battened and taped, nuts, bolts and screws were nordlocked, bond locked and landlocked for now. The Tapir would soon be sailing across the channel safe and sound and snug as a bug in a rug even though there wasn’t a rug within miles and by the way for those who don’t know what a Tapir is… The Tapir is a large herbivorous mammal, similar in shape to a pig, with a short, prehensile snout. Tapirs inhabit jungle and forest regions of South America, Central America, and Southeast Asia.   🙂
We ( team 3) left Woking at 06:15 and headed off to Dover in order to make it by 07:55. We arrived at 08:15 and were told that we would need to take the next ferry, which meant leaving Dover an hour later.
Once on the ferry we headed for the eatery and had breakfast while keeping our eyes pried open.
This ferry ride was, compared to last years ferry ride, rather uneventful! No time travelled pirates of the Caribbean rendered deaf driving motorcycles, not a single odd event unless you count the group of big men staring at me and wondering if my camera was a camera or a gun in disguise. You see, I have a nifty over the shoulder strap with a smaller strap that locks under my armpit just like the holster of a detective’s gun! The leery eyed guys eventually decided I was too small to bother with and besides they figured being shot to death with a digital camera might not look good on their résumés!
Eventually the announcement came over the p.a. announcing our arrival in Calais. We headed down to the D1 deck and discovered our trusty steeds were surrounded by behemoths otherwise known as tourist busses with floppy rabbit ears doubling as rear-view mirrors and tail pipes belching fumes, which for behemoths such as these happens to be anatomically correct. They were grumbling in their eagerness to get off the ferry. Refraining from the usual gasp and cough we climbed into the truck and waited our turn to disembark which, thankfully, didn’t take long at all and we were off and running.
Our route took us through France on the payage, toll roads that were perfect ribbons of black or gray asphalt. I was imagining them to be covered in the newly developed solar panels specifically designed for roads, runways, playgrounds, basically all roads and hard surfaced areas in towns and cities. Alas this is not yet the case! However since it is the payage it meant our ride would be smooth and the tapir would not suffer from the shake, rattle and roll of the pot-holed Belgian highway system next door. We eventually arrived in Schorndorf at midnight happy to be meeting Peter and Helga Schwan who would also be joining the WAVE for the first time. They are wonderfully warm people and we are so glass to have this opportunity to get to know them. Gordon and I stayed in their guest apartment and we felt right at home. 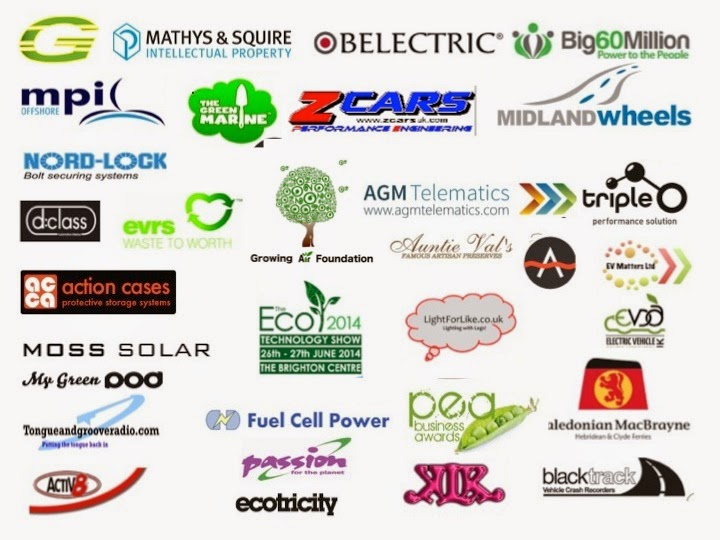 One thing is for certain, were it not for the following sponsors we would not have been able to take part in the 2014 WAVE! We thank you all whole heartedly!!!  And, to show how much we love you we made a nice heart with all our WAVE team friends to say a big thank you! 🙂 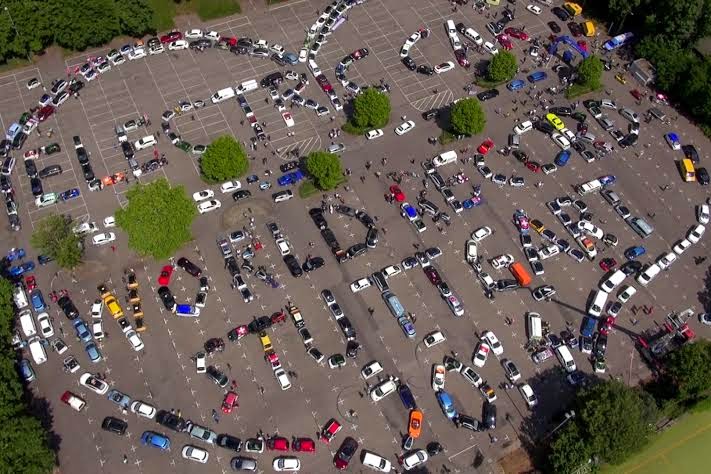 World Record Parade press photo, Can you spot our teams? We (team 3) are in the 2nd E of the Word “Electric” and the Buggy is top right of that letter E!  Also worth a watch is our WAVE you tube video, see https://www.youtube.com/watch?v=e0lMyVfUQFs   and not to mention Team 3 ( Gordon and Leora appeared on Swiss Prime Time today!!)

If you like to find out where we are in and how fast our cars go you can go to the Live tracking page for Team 3 and 37. This dynamic map can be found at the following link http://web.agmtelematics.net/ShareTrip/index.aspx?token=lfvpapvqr1k   Sponsored by AGM Telematics.