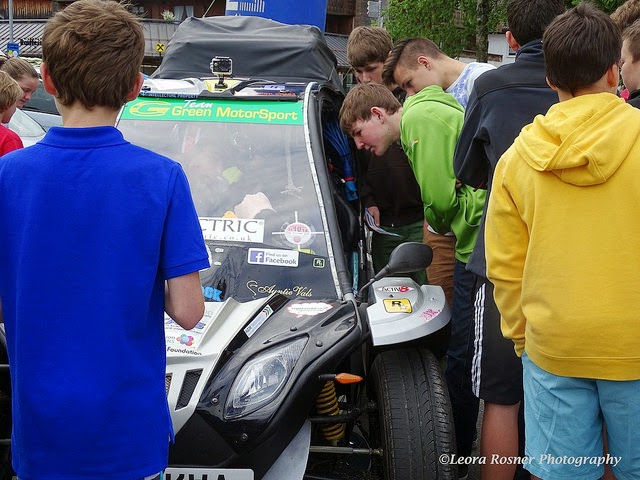 The time had come to present the WAVE vehicles to schoolchildren in a few towns which meant, as far as I was concerned, party time! They are the best audiences ever thanks to their curiosity, honesty, warmth, good humor and their wonderful feeling about the natural world. Since every member of every team had received a toy pig in Hohenlohe, a breed that had almost been wiped out and was subsequently saved from total extinction, one of our piggies was also serving as the navigator, or at least as far as the kids were concerned.
As we drove into the first town the sidewalks seemed to be covered by school kids, all waving, clapping, cheering and some waving flags. The pig, who shall be referred to as P.W. (Piggie Wiggie) came alive and wiggled and jiggeted about in utter ecstasy at seeing all the kids. And the kids cheered louder and waved more furiously while pointing at P.W. Once we had gone through the WAVE arrival arch we parked the Tapir, unzipped our doors and climbed out. At that very moment we were surrounded by a large group of kids varying age between 10-15 all completely captured by the Tapir. Their looks of surprise were priceless and they had many questions. I went off to grab a coffee and break my head deciding which delectable local pastry to choose. Charged with coffee for my own battery I strolled back outside and was immediately sour rounded by a small group of kids. They had all sorts of questions, not only about electric vehicles but also the environment and the connection between the two. These likes were on the ball, awake and aware. As I answered each question one would finish answering before I could finish. We were all on the same page and I congratulated them on this fact. I eventually asked them if they would like to see the Tapir and received a very enthusiastic answer. In true John Cleese style I said, “Follow me and walk as I walk!” So began the silliest small parade ever. Every jousting leg, outstretched arm was perfectly copied and all were laughing as we approached the Tapir. Their jaws dropped, their eyes blinked in surprise and they loved it! We visited more schools and saw many more kids that day all convinced that our fearless Piggie, P.W. was our faithful navigator.

It was time to charge, have a chat with other WAVErs and get moving again. This would mean, as it had meant on other days, that the numbers had to be read and those numbers were the State of Charge (SOC), current and voltage of the battery pack being used at that time. These numbers would give us an indication of battery use, how it was being used as well as achievable distance. All improved on a daily basis and Gordon’s motor was working a charm and very willing and able to just drive forever. A real workhorse fed by the batteries, which extended our range daily. After all, let us remember that the Tapir is a prototype and as prototypes go this little buggy definitely can rock n roll!!!!
Share this: