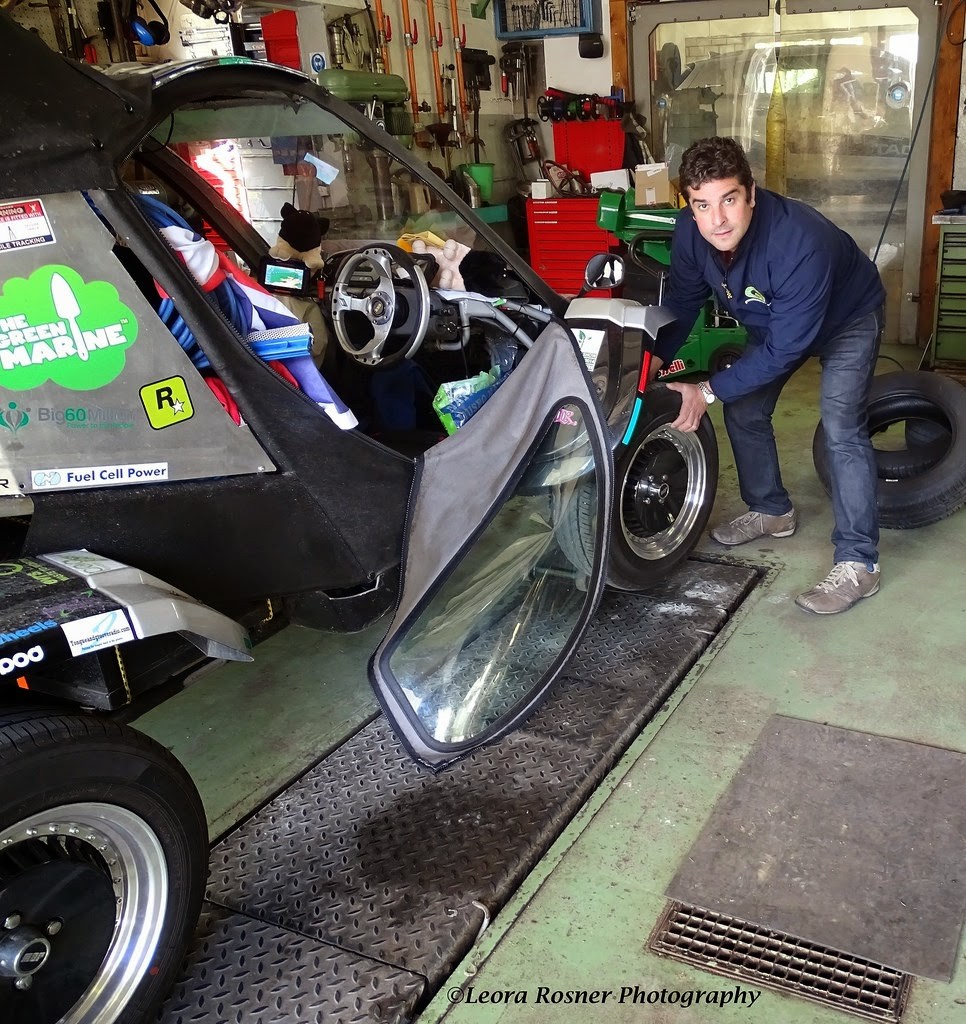 Today was to be “new” tire day. After breakfast we loaded up the Tapir and headed off to look for the garage we had spotted the day before. We drove through one small town but the garage did not magically appear. However, in the next town it was exactly where it was supposed to be and we pulled in.
Gordon explained the situation and showed them the problem where upon they told us to come back in an hour. Gordon replied, “We are here on a special mission and there are 3000 people waiting for us!” They said they would get on it immediately and they did. The two front tires were taken off and the “new” ones put on and we were road ready and champing at the proverbial bit.

Off we drove into the distance ahead of us. Things were going well but due to the tire exchange we were running late. The afternoon began and we made it to Broc, plugged in, ran to grab a sandwich from the catered lunch, nothing for a vegetarian, the first time on this WAVE, grabbed a banana and an apple, Gordon grabbed a sandwich and then 3 minutes later were told it was time to leave. PANIC!!!!! We needed to charge, we needed to eat something but we also didn’t want any penalty points. So off we went in search of a plug and no penalty points. We stopped at a furniture-building place in an industry area and the guys there allowed us to plug in. The sun was absolutely brutal and we eventually left in search of a less heated place. A couple of hours later we stopped at a gardening center. Gordon spoke to a woman there who instructed us to drive around the back and there we would be able to plug in. We did as we were told and, sure enough, we could plug in and charge the phones as well. It was fantastic there, surrounded by plants, veggie plants, fruit trees and the Alps outside. They let us stay until they closed at 18:30 and we hit the road again. This was going to be an epic plug in day whether we liked it or not! We had been driving for quite awhile when it was again time to plug in and wound up at a refrigeration company. We had literally just driven up and climbed out of the buggy when a truck drove up and parked. A well-dressed woman got out and asked what we were doing and offered to help. Once we were plugged in she went to the nearby house and let out a young dog who ran around like a maniac. She needed to leave and told us that her father would be coming home soon and that he knew we were there and why and everything was ok. She drove off in a small car and 10 minutes later her father arrived. Jacques introduced himself and was very interested in the Tapir. He told us he had driven on a motorcycle to China and upon arrival they refused him entry. He was still intent upon making the complete trip.
The batteries were now charged and we could leave and so we piled in and off we went. We had been munching on fruit bars, rice crackers and cheese and honey throughout the day and we getting hungry for something more substantial. We arrived In Murten fairly late, had missed the dinner and needed to find a place to eat. Our stuff stowed in the youth hostel we wound up at a café where several other teams were enjoying a few beers and munchables. Bread pizzas were ordered and we swallowed them whole. The rest of the evening passed with much joking around and laughter and pretty soon we all headed back to the youth hostel and some much needed sleep.
Share this: