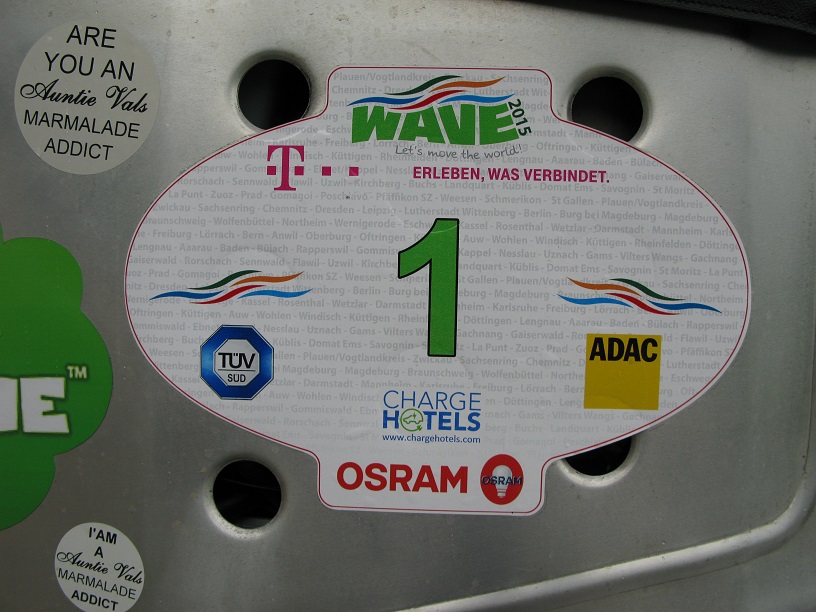 Here follows the following days of Team Number 1 (route master track number 76978) of the WAVE rally 2015  in a row of conglomerational legend: 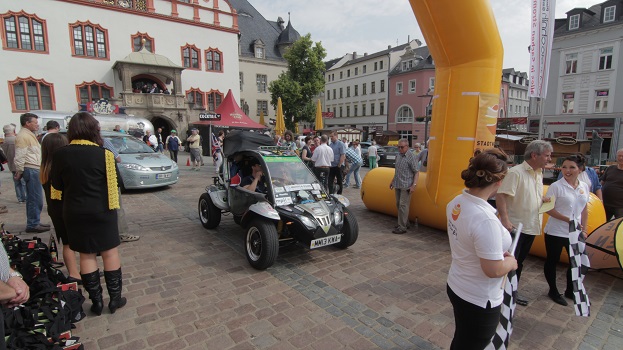 After leaving the Sachsenring and getting caught in a a rather furious storm as explained in the first blog entry we began making our way to Wenigerode. This was the first step in a brutal game of catch up making us feel as though we had entered the Ketchup Swamp of Slogdomia.  The floodgates had opened and the mythical beast Caper led us on. But let me digress for just a moment….. In Leipzig after talking with Team Fruma about the Growing Air Foundation petition demanding the restoration and protection of forests worldwide an agreement was made. They would be camping out in the woods for the night with their magically time warped truck. They would bring a seedling for me  to be planted at Tesla in light of the fact that the Tesla group would be talking with Angela Merkel about sustainable transportation. The connection? A statement had to be made about the fact that this would not be enough to help save the environment, forests would have to be restored to insure the process. The following evening upon our late-ish arrival at Tesla, lo and behold, Fruma trucky handed me an Acacia seedling wrapped beautifully in an adult Acacia leaf. 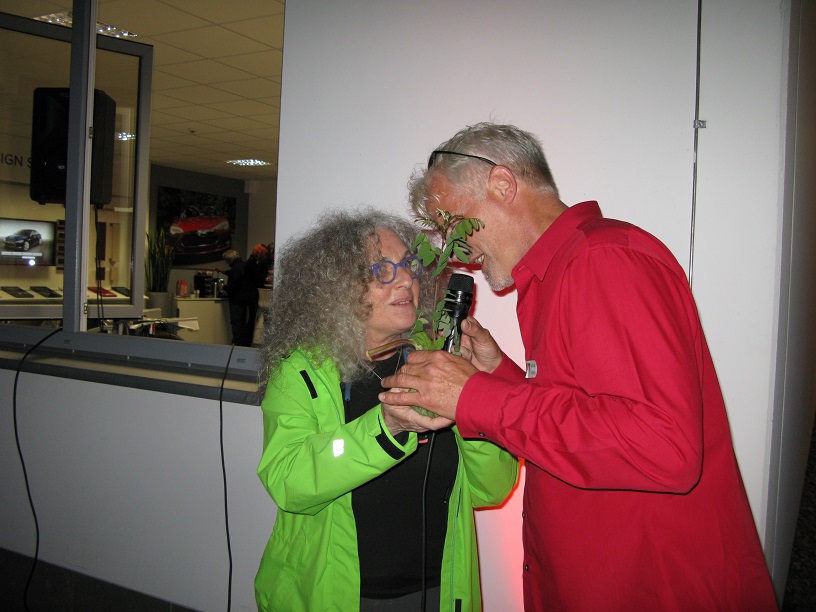 The wake up process had begun and I needed to talk to Philip aka Tesla man and eventually talk to the entire bunch about the petition. It worked and after addressing the group presented the Acacia Tree for Tesla to replant and care for into adulthood. Shortly after, we continued charging until deep into the night and headed off at around 03:30.
Then things began to melt into a confusing pudding of late arrivals, missing mattresses, a slithering snake of lost z’s squirming across an outstretched tarmac of bituminous musculature biting at our tyres.
We were on our way to Wenigerode and with a little positive help from the mythical beast Caper we would arrive approximately  within an hour and a half. With back teeth beginning to sail the dental sea Gordon lit out for a privy spot to relieve a bitching bladder. The Tapir was parked beneath a large tree dropping feathery like seeds, rather reminiscent of the tree of life in Avatar! I expected the Na’vi to appear in full regalia. Secretly I wished for an Ikran to appear with wings spread and teeth dripping with excitement at the conjugal possibilities with the trusted Tapir producing an electric vehicle the likes of which would make everyone jealous and eager to have. Thankfully Tapirs and Ikrans would never meet and the Tapir would have her own litter of even more powerfully reliable descendants in the near future.
Gordon reappeared and off we drove towards Eshwege where we would be able to feed the Tapir her electric oats and hopefully ourselves with something more than just a simple sandwich.
Gordon got on the phone and called the sister of an old friend. Natalie soon appeared like a rescuing true blue knight bubbling with energy, warmth and laughter. She carried our weary brains and bodies to her home for showers and refreshment in the form of copious mugs of tea, fresh salad and pizza and plain home grown southern hospitality. She is legend and I look forward to her visiting Amsterdam to return the favor in true Texas style. 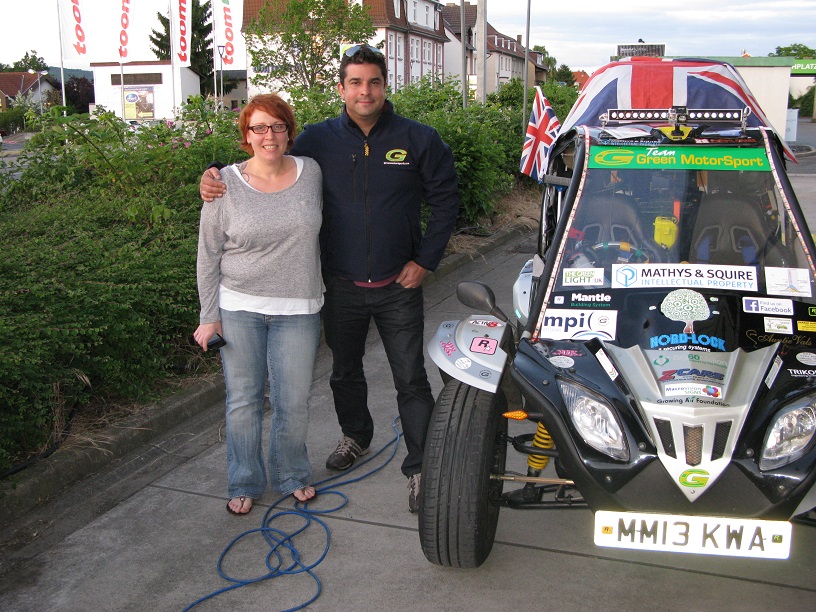 From that evening on we drove in tandem with Team Brusa, Christian and Mirko, two totally delightfully warm funny guys. We were bringing up the rear and in so doing were the caboose of the WAVE.
Considering the state of affairs of the daisy chained days of driving, charging, sat navving or in some cases sat nagging the Tapir needed to have her front tires looked at. She seemed to be suffering a particular case of pigeon toes which for a Tapir can be rather debilitating. Christian and Mirko were consulted and Gordon bit the proverbial bullet of traditional Texas State law; shoot first and ask questions later.
Off we drove in tandem in search of a garage. It didn’t take long before we found the perfect place. The garagnicks loved the Tapir as well as the Brusa Volvo and let us plug into those nourishing electric oats. Tires were chosen, the old ones removed and the Tapir began champing at the bit and once again we lit out for greener pastures along the straight and narrow. 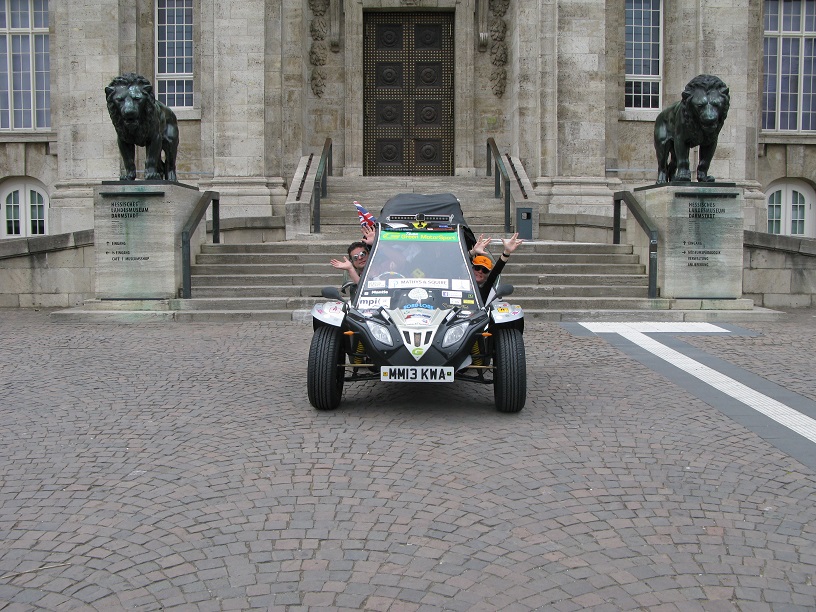 We, Mirko, Christian, Gordon and I needed to get to Darmstadt in the hope of actually meeting up with the rest of the WAVErs to continue not just as a caboose but the kabosh was still after us….yes the mythical beast Caper never tarried and insisted on a chronic dose of tardiness. We four now feared nothing and the Darmstadt lions greeted us warmly addressing our growling stomachs with silent roars of approval. It was, once again, oats time for the cars and we four desperately needed a delectable warm meal that in no way resembled a sandwich. We found the perfect place and thoroughly enjoyed ourselves. It didn’t take long before a what’s app message from Stephan announced itself on my phone. He was calling us all the Bravehearts and so I decided to call our little group Team Bravehearts!
We had to move on towards the university to further oat up our trusty steeds and that would prove to be no mean feat. The search of searches began in earnest searching for the unsearchable plug(s). It took us an hour or more meandering around the KET the university of Darmstadt where we actually found a couple that worked. The only thing we could do next was try and get some shut eye amidst the suitcases and other paraphernalia in the vehicles. A couple of hours later and we awoke to stiff necks, growling stomachs and the bloodshot eyes of perdition screaming, “DRIVE CARS, DRIVE CARS, DRIVE CARS NOWWWWWWWW!”
Well, that scared the heebee geebees out of us and off went to look for the brew of brews, a mugga Java and tasterly pastries fit for Team Braveheart!
Leora the bloggerific