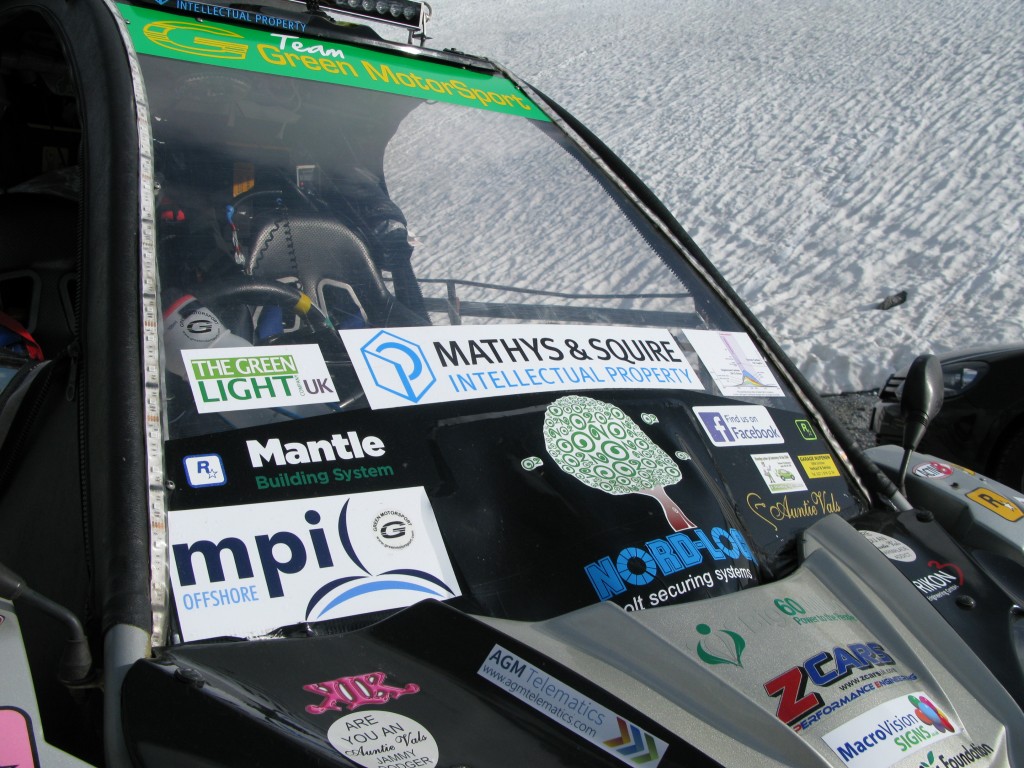 After our tasterly breakfast of pastries and mugs of java we, Team Bravehearts, hit the road since Jack was nowhere in the neighborhood to affect any immediate change. Considering the fact that we were driving with the goal of eventually catching up with the rest of our group there passed before us, not just an unwinding tarmac but also a number of towns, cities and landscapes. They all began melting together into a parade not unlike that of a long line of elephants, trunk to tail and diverse in size and colour.

We eventually arrived where other WAVErs were, plugged in, and went off to hunt for the eatery where pizzas were being served to all teams. We tucked into our food like dinosaurs on a rampage, our stomachs being satiated on something other than the proverbial damp sandwich in a plastic triangle of packaging material. The bliss and the joy of warm food. We sat at a table with another team and Stephan who extolled the symbolism behind the little marble of blue with a green strip that he had been carrying around for the duration of the WAVE up to that very moment. He then gave it to me in support of the Growing Air Foundation petition demanding the restoration and protection of forests worldwide.

The time had come to get moving again. Off we went to unplug the Tapir, gather our wits, roll up the charging cables and re-install ourselves in the belly of the little beast that could. We wended our way through the little town and headed for the next destination on this weaverly WAVE of zig and zag, warp and weft across a changeling landscape with the intent of finishing the Kings stage of the WAVE.

All that was needed now was driving across an amazing mountain pass. And that mountain pass needed to be crossed even as the weather gods giggled rubbing their hands in perverse anticipation.

The climb began innocently enough and all was good with the world. As we gained in elevation one could not help but notice the mad sprinkling of hairpins and switchblades, those sharp curves in a road that make you sit back and hold your breath. 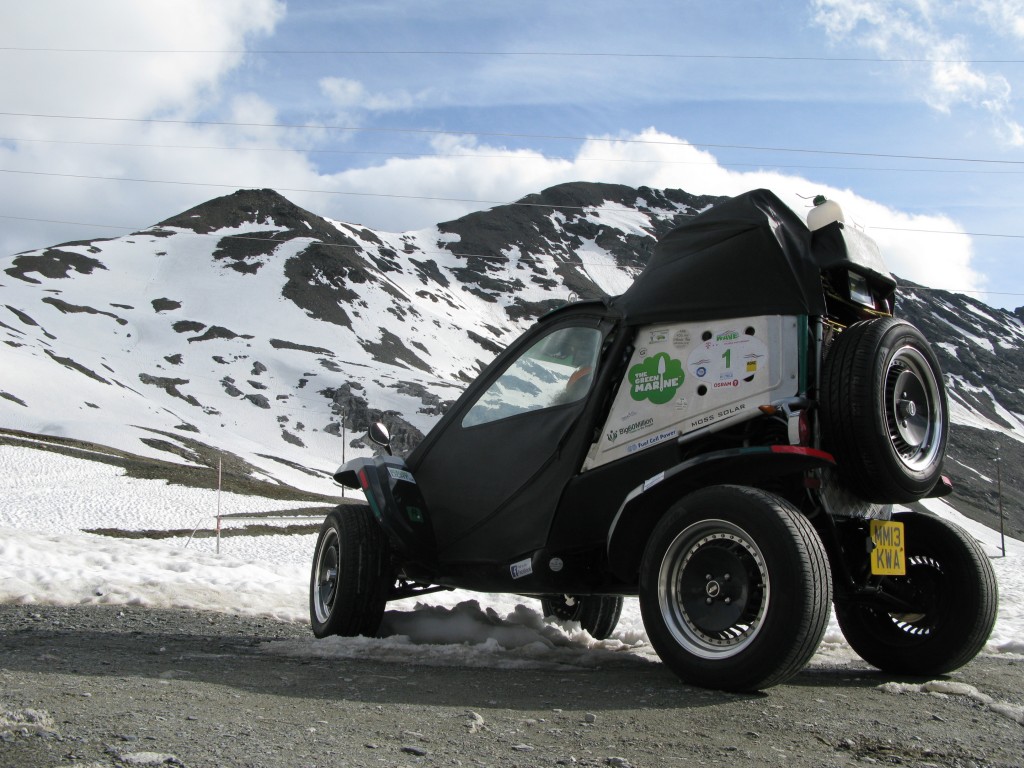 The trees were covered in frosting and the ground and rocks in glistening icing as the snow pelted the Tapir and the road. Visibility was fast becoming a problem in more ways than one. Reaching the top was a celebratory moment for we now had to go down through another spillage of hairpins and switchblades strewn across the bracing landscape that would lead us down to warmer climes and roads made of straight and narrows towards the finish line in St. Gallen.

Unfortunately the fates or rather that one particular fate, the mythical beast Caper, had one more surprise in tow for us. After a couple of firemen in their fire truck led us to a spot where we could charge we headed for a place to have a bite to eat and a more or less comfortable place to sit. We wound up buying the proverbial gas station food and parked our bodies in, of all places, a small tourist bureau. The ladies working there were warm and friendly saying we could take all the time we needed. After about an hour we picked ourselves up and headed back to the Tapir. The cable was unplugged and stashed and then we climbed in, zipped up and headed off.

It didn’t take long before a small sound made itself known. Gordon began listening to all the sounds the Tapir made but couldn’t yet discern what the problem might be, if any. Lo and behold, leaving a traffic light behind us the sound occurred again. Gordon’s ears grew bigger and a discussion ensued, mostly with himself, of what it could be. I, too, had heard the sound as well and concern crawled into my belly and quietly nestled there in an alternative protective custody. The Tapir seemed to be doing just fine, so we carried on and then it happened. We rolled onto the grassy shoulder of the road and came to a full stop. Across the road we spied a small side road and decided to get the Tapir across into more safety for all involved. Gordon got down on hands and knees and peered at the right rear wheel and axil. It was done for and we were stuck, 30 kilometers from the finish line.

As Gordon tried to figure out how to get the Tapir moving I spied a green bubble car as it drove past and into the distance. 20 minutes later a small black car drove towards us and pulled over. A couple got out of the car and said, “We were driving along in our green bubble car when we passed you and decided to return to see if you could use some help.” Martina and Charly helped pull the Tapir behind some trees and then they took us to the train station where we bought tickets to Romanshorn which is outside of St. Gallen, the place we would sleep that night. We finally arrived at the Romanshorn Youth Hostel at around midnight. We spoke for a mere few minutes with the WAVE e-bikers and headed inside to sleep. The following morning after breakfast and a great chat with the “owner” of the hostel I was picked up by the Dutch E &E Mobility Team, Ed and Eric, and we headed back to the Netherlands. Gordon, on the other hand had a very busy couple of days on the trains and truck to pick up the Tapir and bring it back safely to the U.K.

And so ended WAVE 2015 for us, a few thousand kilometers further and more stories to tell than you can shake a stick at. 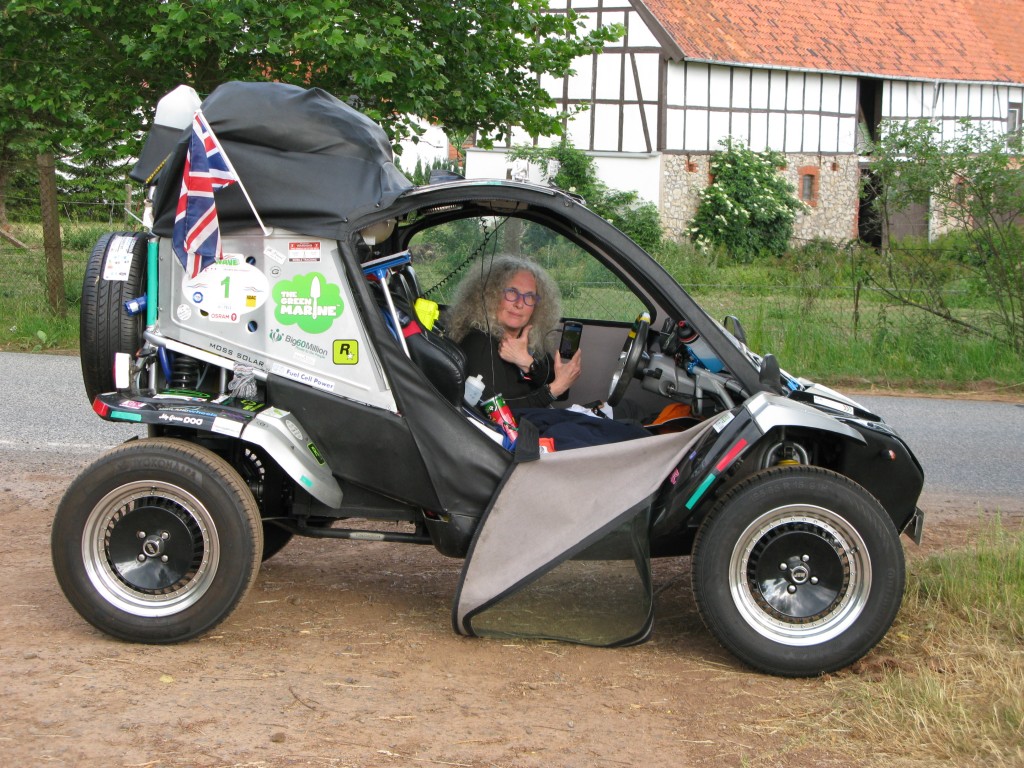