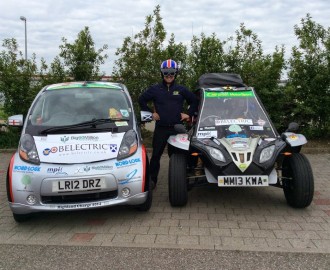 This buggy, the Tapir, we are driving in this years WAVE is the result of a wild discussion on the way back from last years WAVE and as a prototype this years WAVE will be her debut. Her children will be enlisted in GAF projects carrying seedlings, water and people and will also be sold to the general public as an all purpose vehicle for on and off the road as well as for simply tootling around the countryside. END_OF_DOCUMENT_TOKEN_TO_BE_REPLACED 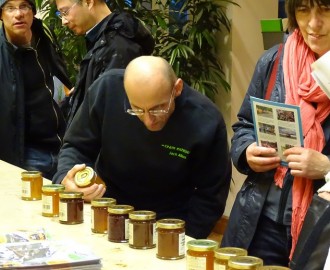 Eventually Friday came and after getting things organized Peter and Helga announced breakfast was being served on the top floor, which happens to be his parents apartment. The table was decked out and truly looked wonderful. Various jams, boiled eggs, four different types of bread including big pretzels, just like in Central Park in New York. Of course Germany is the source of those famous pretzels! Delish! There were also a couple different kinds of cheeses and pork that Gordon got into quite happily. END_OF_DOCUMENT_TOKEN_TO_BE_REPLACED 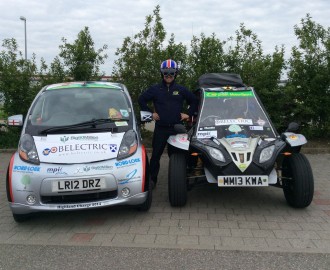 We, Gordon Foat of Green MotorSport and I, Leora Rosner of the Growing Air Foundation and Brian and Jean Orr of EV Matters are Team Green MotorSport with WAVE rally number 3 and 37. Pretty cool, the number 3 for it is one of the Fibonacci numbers, which appear throughout nature. Since we are forging the double edged sword against climate change to help our planet, the natural world, then that number is magic, that number defines us! END_OF_DOCUMENT_TOKEN_TO_BE_REPLACED 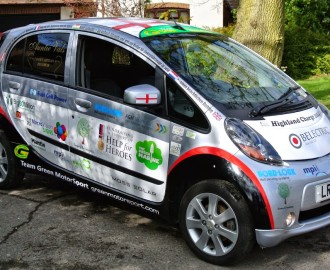 Gordon Foat of Green MotorSport is preparing for the WAVE 2014, the fourth drive across Europe for battery electric vehicles powered by renewable energy, from 31st May to 7th June. Green MotorSport successfully participated in all the WAVE events, driving across some of the most demanding territory in Europe. This year Team Green MotorSport will have two entries. Our support vehicle will be a conventional battery electric car, driven by our colleagues from EV Matters, Brian and Jean Orr.

END_OF_DOCUMENT_TOKEN_TO_BE_REPLACED 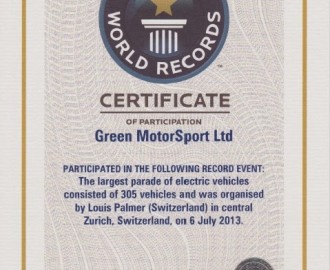 END_OF_DOCUMENT_TOKEN_TO_BE_REPLACED

Heavy batteries, batteries that don’t last long, long charging periods – just some of the grumbles surrounding electric cars. But that’s changing. Just like mobile phone technology, electric car technology is improving and adapting to meet consumer needs. Including those who love motor racing. Gordon Foat of Green MotorSport Limited says not only do electric vehicles provide green and clean transport, electric cars are much more efficient at producing traction energy form a fuel than any other system. 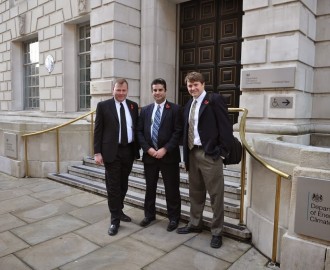 The UK is reverting to using traditional nuclear power, but there are potential safety problems with conventional technology.  With all solid fuel high pressure nuclear technologies there is the danger of reactor meltdown under certain circumstances, and  there could be proliferation of nuclear weapons if plutonium becomes  more widely available. It will also be necessary to store hazardous waste for 10,000 years.

END_OF_DOCUMENT_TOKEN_TO_BE_REPLACED 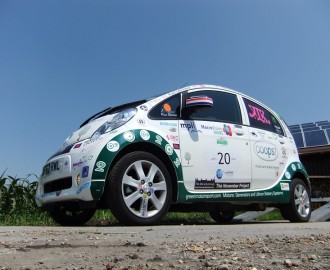 Deep within the darkness of the bunkers rooms alarm clocks sounded. Doors opened, people shuffled into showers, stripped beds, pulled on clothes, gathered suitcases and lumbered out the door into the daylight with paper bags of breakfast waiting for us in the shade of the trees of the square where our vehicles were parked for the night. Our trusty steeds were champing at the bits after a nocturnal feeding of electric oats fit for a king. When everyone, or at least those who stayed for the very end, were fed and watered we hit the road once again. There were three more “open doors” from which we needed to get our stamps for the final score. The unfortunate thing from the day before was not being able to find one place which eventually was found! So, getting today’s stamps were an absolute necessity.

END_OF_DOCUMENT_TOKEN_TO_BE_REPLACED 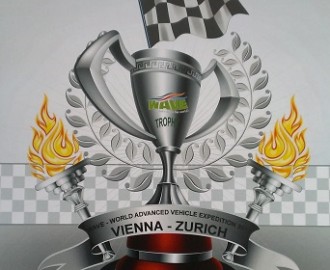 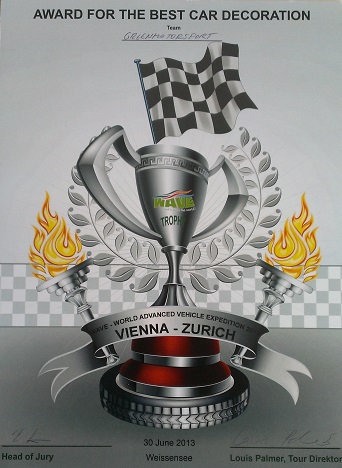 We won 3rd for most efficient car and first place for best design! Overall we came 7th out of over 40 electric Wave cars. Many thanks to all who delivered on the sponsorship!

END_OF_DOCUMENT_TOKEN_TO_BE_REPLACED 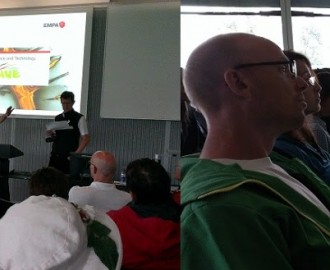 The days are beginning to run into one another and the numerous stops in small towns have become a set of frames in a film with a soundtrack that is not exactly running in a clear synchronicity with anything but itself. Salvador Dali would be proud with his watches dripping into warped time and space stretching and curling into a Möbius strip of backdropped music, people milling around and electric moments of presentations. It has been an exciting day!

I must say the most exciting part of the day was our visit to EMPA. There are many very innovative and fascinating things being done there. An acoustic curtain with numerous holes of varying lengths and sizes which put echoes to shame stopping them dead in their tracks. Can you imagine socks that are so incredibly smooth that friction no longer exists and therefore blisters stay right out of the neighborhood of your tootsies! They are already being used by the Swiss military who I suppose decided it would be a cheaper investment then the constant re supplying of band-aids. A this point this writer put a question forward to do with the socks in connection with the acoustic curtain….I’m going to keep this to myself, mwa ha ha ha simply because our guide through this wonderful tour liked the idea. And then there is a sheet to be used in hospitals to alleviate the problems of decubitus. In fact, the decubitus never even gets a chance with this particular material because it warns the nurse to turn the patient. 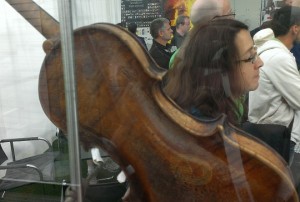 There is even something for violinists! Having a fungus among us in our violins is actually a good thing. Why? In the days of the Stradivarius it seems that a particular fungus attacked the  trees used to construct the Strads giving the violins their particularly rich sound. In the contemporary construction of violins one misses this richness of sound. EMPA has found a way to introduce the fungus to the wood and constructed a violin which was then compared to a Strad and the sound was the same!!!! How about that!!!! Fascinating!!!! From fungi and Strads we were shown the breakdown of a mobile phone right down to the nano particles explaining they had as yet no way to save those np’s from going to waste simply because they could not be “caught.” This writer came up with yet another question/idea and the young lady was then told by our guide she should be writing this down. No, I’m going to keep that under my belt as well;-) Our guide continued telling about bullet proof vests that would actually keep the wearer cool which in itself is pretty cool unless your the cop or maybe the perp who is caught because the cop is cooled! The last thing had to do with orthopedic implants and then we went downstairs, took a test and had something to drink and off we went to the following place. EMPA, you need to think about cross over between labs to find more novel solutions to problems. In other words cooperation between differing labs. Or just call me…. 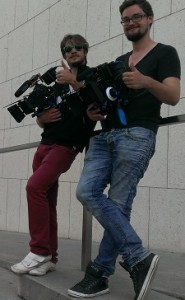 We arrived in Gossau where we would have lunch. The was something for the vegetarians like myself but unfortunately it was disappointing. However, a woman witnessed me kick a bollard in frustration and sheer hunger and walked over asking what the trouble was. Gordon and I explained and she took us on a whirlwind run to a small restaurant that had closed, brought us round the back, walked in and asked if they could throw a couple of salads to take away for us. The owner of the restaurant, after hearing the explanation from Helena, immediately did the deed where upon Helena led us back to the WAVE area and off we drove. Helena, you are our hero of the day and we thank you from the bottom of our hearts!!!!!
Baden was our next and final stop of the day at the APP, the company that develops and builds the Chademo chargers for electric vehicles. The mayor spoke and he has a full plate what with the greening in all its facets of Baden. A brave and determined man and I wish him strength and determination in his endeavor to further green his city. It’s been another long day and now we are in the youth hostel by the river listening to its flow of white noise in the night. An early morning will bring us to the Zurich Festival. Tomorrow will also bring that report.